Scott Kahn, M.D. is an award-winning North Carolina-based close-up magician and mentalist who has been performing professionally for over 25 years.

Scott dazzles the mind as he challenges his audiences to wonder whether what he does is real or unreal and what is possible and what is impossible.  He is an entertainer that dramatizes the unknown, the unexplained and the uncertain.  After witnessing his unforgettable and mind-blowing magic, you too will become a believer.

Scott was born and raised in New York, where his interest in the magical arts began early in life at the age of 8. Throughout his college years, he regularly performed both magic and paranormal entertainment in many popular comedy clubs on Long Island, including Governor’s and McGuire’s.

His original sleight-of-hand card effects have been published in both Genii, The Conjuror’s Magazine and MAGIC Magazine, the two largest publications for magicians in the world. 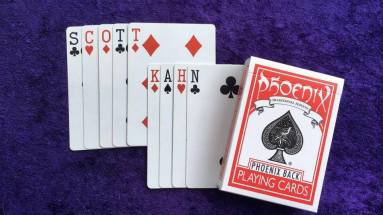